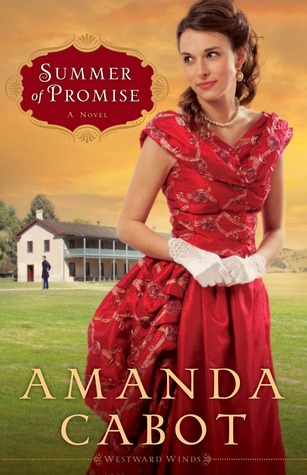 I really really loved this book. I’ve hardly read anything like it. It was so wonderful. If I read it in two days, that has got to mean something good, right?!

Summer of Promise is the story of Abigail Harding. Though wanting to spend her summer in Vermont with her soon to be fiancé. She feels called to go visit her sister who lives in Fort Laramie, Wyoming. Her sister says everything is fine in her letters, but Abigail feels like something is wrong. On her way, her stagecoach is attacked which promises that her stay in Wyoming will be anything but boring, as she thought. After a time, she feels called to stay in this wild land and to one young soldier who is falling for her. But can she find where her heart truly lies, in Vermont or Wyoming?

I decided to read this book because someone recommended it on a blog I can’t seem to remember at the moment. Anyways, I haven’t read much romance novels or a ton of historical fiction. So, I was very surprised to find out how much I liked this book! It was fabulous!!!

The setting in the late nineteenth century after the Civil War was perfect and made the romance so much sweeter. The land was described beautifully and now I wish I could go to that time period… The romance between Abigail and Eathan was sweet and touching. The book switches between Abigail and Eathan’s point of view (there is also one other person’s point of view shown just a few times). There were even a few exciting and dangerous moments which I was surprised to find.

Now, there was a thing or two that was mentioned and was inappropriate but was realistically there in that society. I didn’t feel uncomfortable with it though, because it was displayed in a bad light as the wrong thing to do (and wasn’t described with a lot of details). That said, I wouldn’t suggest this book for kids or young teens.

I would recommend this to those who like clean, Christian romance novel with a little bit of adventure. This was a really good book.