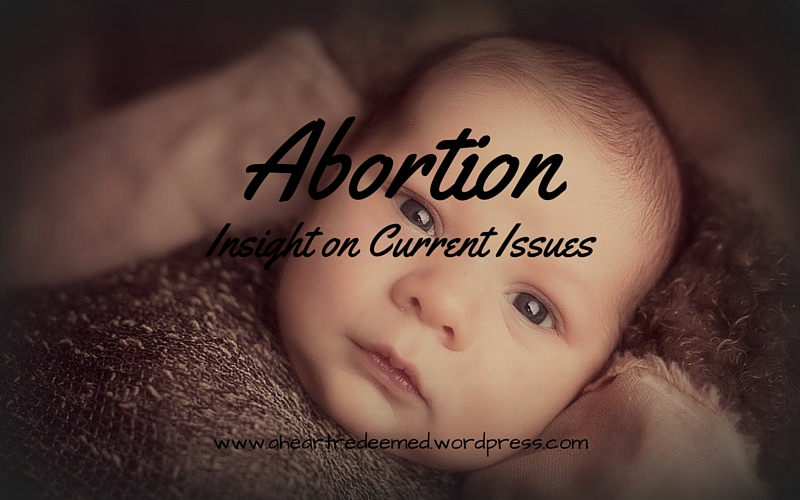 Hey ya’ll! I’m starting a new series of posts on current issues in today’s world. Please feel free to let me know what you think!

Abortion has become a big issue for the United States of America since the late twentieth century. At least, for Christians it is an issue. For most other people, the killing of the fetus in the womb is a part of life. In this essay I hope to convey my stand point on this serious topic. I also hope to give a good reason why I take the view point I do. We must oppose this practice and stand up for what is morally right.

So what is my view on abortion? Well, I hope it would be pretty clear that as a Christian I would believe to be wrong. Abortion is murder. The fetus is alive from conception and is a human being. In the Bible there are references to human beings in the womb called children. God certainly must have believed that they were human, not fetuses. The Bible acknowledges that it’s life is worth just as much as an adult’s.

Now suppose two men are fighting, and in the process they accidentally strike a pregnant woman so she gives birth prematurely. If no further injury results, the man who struck the woman must pay the amount of compensation the woman’s husband demands and the judges approve. But if there is further injury, the punishment must match the injury: a life for a life, an eye for an eye, a tooth for a tooth, a hand for a hand, a foot for a foot, a burn for a burn, a wound for a wound, a bruise for a bruise.

It is murder to kill an innocent human being. One of the Ten Commandments says the we shouldn’t murder. Now we all are born into a world of sin. We’re all sinful and would be condemned to eternal life in Hell if not for Christ. Murder is murder whether it is an adult or an infant.

We as a nation are striving for peace, but there is a war within our very borders. Undeniably it is a war for life itself. Human beings are dying before they even get a chance to see life out of the womb. Life is precious, but we’re constantly destroying it. These children have a right, a right to live.
‭‭
More than half the population in the U.S. believes abortion is wrong. But because of a few dissenters, now abortion is legal. We need to stand up against this legal right to murder. We need to support and finance the organizations that are opposing abortion. Let’s vote for and support legislation that protects the unborn. I’d rather face judgement by man man than judgement by God.

Abortion is wrong. That’s what I believe and I hope that is what you believe too. It is clearly murder of a human being and I’m sure we all know what God says about murder. Abortion is legal now, but I know that if we stand together we can change that. Isn’t that what the African Americans did to get full civil rights? Let’s oppose this. It is our obligation to God to do so.