Hey guys!!! I’m posting today on the newest addition to The Blades of Acktar series. 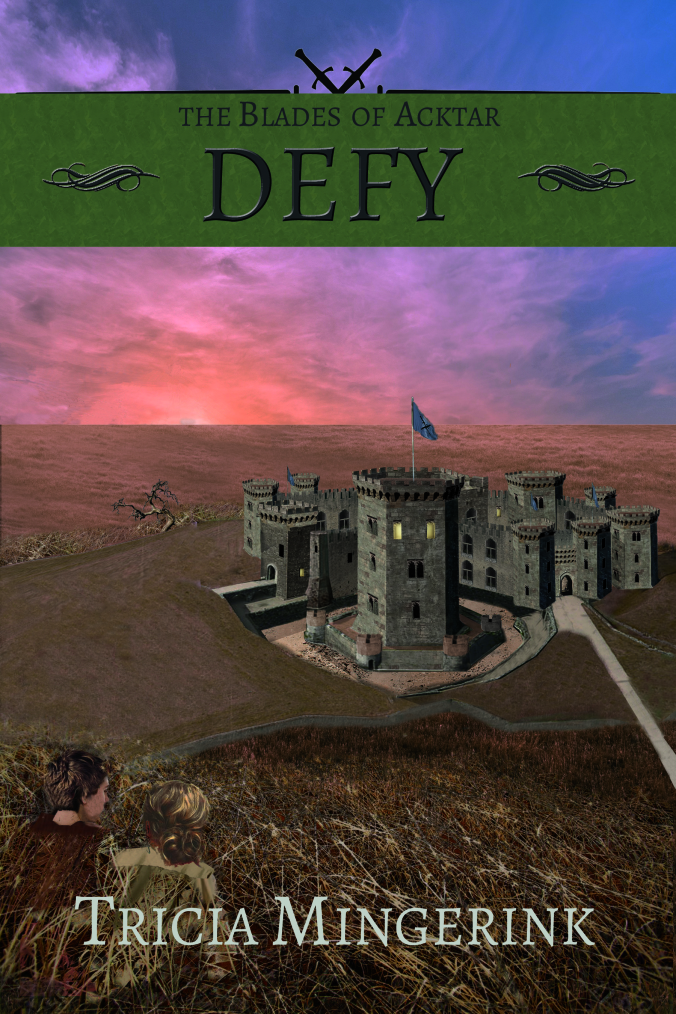 The war for Acktar has begun.

Left behind at Nalgar Castle, Renna Faythe tries to find her purpose, yet that purpose isn’t what she expected.

Brandi Faythe has been torn from her sister, and that isn’t all right. If Leith can’t rescue Renna, Brandi will take matters into her own hands.

Acktar rests on one hope:

The Leader is ready. 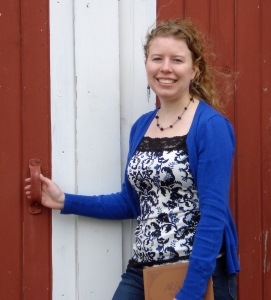 Tricia Mingerink is a twenty-something, book-loving, horse-riding country girl. She lives in Michigan with her family and their pack of pets. When she isn’t writing, she can be found pursuing backwoods adventures across the country.

To see more posts on the blog tour, click here. 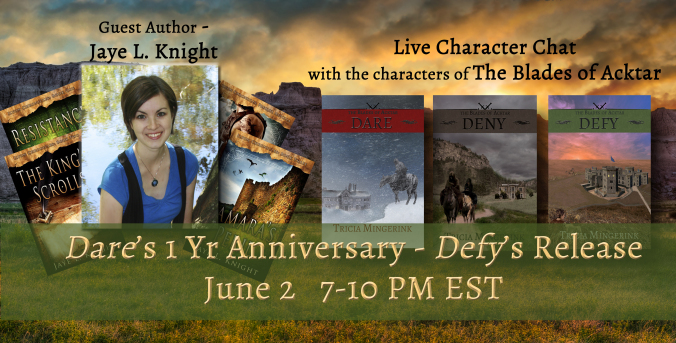 Join Ms. Tricia at the Facebook Party on June 2nd. It’s sure to be very fun! Jaye L. Knight (Another one of my very favorite authors!) will be there too! There will be  giveaways of books by Jaye L. Knight, Nadine Brandes, and Angie Brashear. Other giveaways include audiobooks of Dare and Deny, and paperbacks of the whole series! I’ll be there!

I loved this book. It was more intense than any of the ones before it. Woah… I’m still trying to get over what just happened. This book had me feeling like my heart was being ripped from my chest.

Leith Torren has left behind Renna Faythe in Nalgar Castle. Brandi is upset. She will take any risk to get her back. Who knows what will be done to her by King Respen? They flee towards the Resistance and away from the Blades. Leith only has one hope: that the Leader will help them somehow rescue Renna. But he knows that no matter what, he will return to Renna whatever the consequences.

The bond between Leith and Renna grew and strengthened in this book. The way they interact with each other was so sweet. Leith went through so much, I mean, so much just to protect Renna. It was very torturous to read, but I think it was vital to the story. He is no longer afraid to defy Respen. Renna is braver and stronger than ever before. She has even become a bit bold. She’s kind, but willing to stand up for herself. Martyn, oh Martyn. He will forever be a favorite. I loved how this story went with him, it felt more realistic and true. His loyalties are divided between his duty as a Blade and his friendship with Leith. Brandi goes through some tough stuff for a girl her age and I enjoyed seeing how it matured her. But she is still that adventurous and spunky girl. The Leader…let me just say, he is interesting, and not at all what I expected. He gives me a creepy feeling, but I kind of like him for that.

The pace was fast, really really fast. I love how the book started almost exactly where it left off. I was sucked in and on the edge of my seat the whole time. Boom boom boom! It never slowed down. There was maybe two or three “semi-peaceful” moments, but they never lasted for long. The decisions made by certain characters had me wanting to scream, “No! Don’t do that!”. The near to death experiences were thrilling. The battles were invigorating and moving. The book didn’t end with a bang, but with something more powerful and in a way more similar to real wars. Not everything is fixed and happy at the end, but I liked it that way and I’m betting the next book will set some things right.

Everyone who loves a good Christian fantasy book must read this. It’s not preachy and it doesn’t feel forced on the story. This is one of my favorite series and I hope that you enjoy it too.

Was Defy an easier book than the previous books to write? Or was it harder?

Defy was by FAR the easier book of the series to write. By the time I got up to it, I pretty much had it all planned out, and the writing just came. It was so easy, it actually made it hard to move on to writing something new afterwards since it was just SO easy.

What is a fact that most people wouldn’t know about you?

Summer is actually my least favorite season. I don’t like heat, and I don’t like humidity. In the winter, you can at least bundle up and get warm, but in the summer, all you can do is wear shorts and a t-shirt, and you’ll still roast.

Weird question: have you ever cried over your own characters?

No. I got really tense during the infamous Chapter 42 in Deny and choked up once in writing an early scene in Book 4. Other than that, no. Then again, I rarely cry when I read other books or watch movies. Yes, I’m that emotionless person who managed to sit through Pixar’s Inside Out without tears while two of my friends were bawling their eyes out.

If you had one day to spend in Acktar, what would you do?

First, I’d like to pick a rather boring day so I wouldn’t have to worry about trying to dodge Respen’s soldiers or avoid Blades. I’d like to ride Blizzard and hang out with Renna, Brandi, Leith, and everybody. As long as they weren’t too mad at me for everything I put them through.

If Leith, Renna, and Shad were in today’s modern world, what kind of job do you think each of them would have (if they had one at all)?

Wow, this one made me think for a bit!

Renna – she’s easy. She’d be a nurse, probably working her way up to being a surgical nurse.

Shad – He’d be a second or third generation FBI agent. His father would be high up in the agency, but Shad would still want to start at the bottom and earn his way up without his father’s help. Yet, he’d also feel burdened to live up to his father’s legacy.

Leith – Has anyone seen the show White Collar? My family binge-watched it on Netflix. It has some iffy parts that we skipped, but the overall storyline is about a criminal named Neil Caffrey who ends up working for the FBI catching criminals to earn out his sentence that way. I could see Leith ending up something like that, a kid who grew up in a bad situation, then becomes a criminal informant for the FBI. Possibly with Shad as a partner? 😉

There is two Goodreads giveaways! One is for Dare. One is for Deny. You have to enter by May 31st!