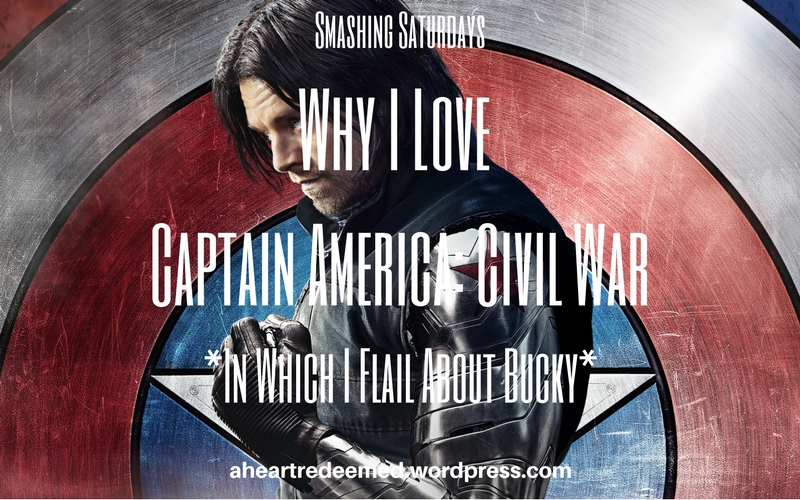 Today, I’m here to flail my Marvel side. *squeals* I love about anything Marvel.

Last Saturday, I got the chance to watch Captain America: Civil War for the second time. It was fantastic since it was too long since I’d scene it in theaters. I think it was even better seeing it the second. I flailed. I squealed. I screamed. And I flailed to Katie during at least half of this movie (It was AWESOME!).

Okay, okay. So let’s get to some specifics about why I love this movie so so so so so much.

Admit it. I don’t think that there is a single Marvel movie that deals with controversy between superheroes to the point that they actually fight each other.

I hate the controversy, but at the same time, I love it. It was real. And especially realistic. Each person truly believed in the cause that they were fighting for. There was so much depth to this controversy, it wasn’t over a trivial matter.

In fact, it kind of reminds me of the controversy that the United States of America had in the late eighteenth century. The fight for a stronger central government against the better  protection of individual rights.

It was played out beautifully. I understood both sides. I felt for both sides. But I’ll always be for #TeamCap. Either way, both sides played their parts wonderfully well.

The action was major MAJOR intense. I was totally freaking out like the whole time. AGH!

Since it was mainly heroes versus heroes, it was even more intense. I wanted everyone to get over their differences and stop fighting. But no. It got on my nerves. It was tense. It was terrifying. It was sad. And I totally emotionally invested, so it was all the more painful.

The fighting was very interesting though, seeing as each superhero has their own style of fighting. It brought about some very interesting sequences. I hated seeing friend fight friend. Some didn’t even want to fight each other. GAH!

I’m not going to give spoilers. But this movie doesn’t end happily, which I’m pretty sure anyone who is planning on seeing this movie is expecting that. But I wasn’t mind about it. I kind of loved it in its own twisted way. To me, it was more realistic, more true to the story. It fitted the story quite well. And seriously, I wouldn’t have changed it in anyway. It. Was. Perfect. (Just be ready for tears in any case.)

There are so many fantastic/heartbreaking quotes. So I’m just going to list some right here:

“If you do this, they will never stop being afraid of you.” “I can’t control their fear. Only my own.”

“Are we still friends?” “That depends on how hard you hit me.”

“It’s your conscience. We don’t talk a lot these days.”

“Hey guys, you ever see that really old movie, Empire Strikes Back?”

“Do you even remember them?” “I remember all of them.”

I tried to put them in chronological order, but…who knows?

I could keep going on with these quotes. There are so many great ones in here. SO MANY. I could quote all day. But I won’t.

BUCKY (BE FOREWARNED: THERE WILL BE LOTS OF FLAILING!)

You knew that it was coming. Now it is here. I could talk about all the other amazing characters (Because seriously, all of them are amazing.), but I’m too lazy to do that so I’m just going to talk about my favorite. BUCKY!

*Warning: There will be spoilers from the earlier movies featuring Bucky*

I’ve noticed a trend in myself. My favorite characters (from books, movies, etc.) are almost always these heartbroken characters with terrible paths, have probably done some bad things, and almost everybody hates/looks down upon them.

Bucky (His real name is James Barnes) is no different. He’s pretty much Steve Rogers only friend before he became Captain America. Then afterwards, he helps fight the Red Skull with him. During one of those missions, he supposedly dies. But it isn’t long after Captain America awakes from the ice that he finds out that Bucky is also alive, but he’s working for the wrong side.

We later learn that he is under some sort of mind control. Because Steve Rogers is such a close friend though, there are moments when he can break free from the mind control. And Captain America certainly won’t give up on him.

So we got this poor mind controlled child who was forced to do so many terrible things. AND I LOVE HIM.

I was totally freaking out. Poor suffering child, I only wanted him to be protected from this harmful world. He’s so precious. None of the terrible things that he did was his fault! No one understands him.*sobs*

There you go! I hope that you enjoyed my crazy, flailing self. 😀 I really had fun with this.

Now tell me, what are some of your favorite parts of Captain America: Civil War??? DO YOU JUST LOVE BUCKY???!!!!! I must know all the things!

8 thoughts on “Why I Love Captain America: Civil War *In Which I Flail About Bucky*”