For those of you who have read my lastest “Monthly High Points” posts, you’ve probably come to the realization that I have a new obsession. Manga (Japanese comic books). Or manhwa (Korean comic books).

Now, I’m going to have to blame a friend of my who ignited my obsession for these “comic books” (By the way, real fans don’t ever call them comic books. It’s sacrilege.). My friend talked a lot about this thing called manga. I was interested in this manga, but I just didn’t have any idea of where to start. It was like entering a whole new world where you don’t know where the beginning is. I soon realized that there is not true beginning. You just pick a manga series and start reading.

In this post, whether you want to start manga or whether you’ve been reading manga for a long time, I want to recommend some manga series that I have read or am reading that I really enjoy.

First, there are some things that you need to know about manga. From what I’ve seen, it’s all in back and white. There might be a couple of pages at the beginning that are colored, but the rest of it is black and white. It is also meant to be read from right to left. That means you would start reading at what would normally be the “back” of the book and then you make your way to the “front”. It’s a little strange at first, but you get used to it.

Now, let’s get to some of my favorite series.

Attack on Titan by Hajime Isayama

This is the first manga series that I invested myself in, so…maybe my opinion on this one is a bit biased, but I LOVE THIS SERIES.

This is a  post-apocalytpic sci-fi story. You don’t know anything about what happened to the world to make it like this, but humanity live surrounds by a series of three walls. Why? Because outside these walls are titans. You don’t know where they came from or what they really are, but they look like giants and they eat humans. The walls are the only things that protect the people from being massacred by the titans.

The story begins with the focus being on Eren, Mikasa, and Armin, but the amount of main characters quickly expands. There are so many great characters. The storyline gets complicated. It is a very plot centered series, and it clearly shows. The way the author/artist makes these heart stopping plot twists is incredible. The way how everything connects is beautiful to see.

As for content, I’d say that it is just very violent and contains some language.

*WARNING* Isayama doesn’t slack off on killing characters. He is absolutely heartless. *WARNING* 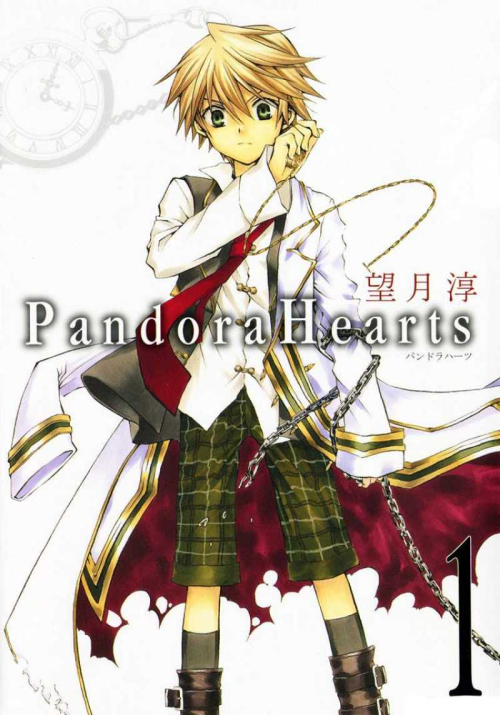 Unlike the previous series I mentioned, this manga series is completed. It didn’t take me long to fall in love with this series. I started reading every little moment that I had when I wasn’t doing school or writing or something chore related.

Heir to one of the duke families, Oz Vessalius lives a normal life, but for the absence of his father. After turning fifteen, he has his coming-of-age ceremony. At that ceremony, everything changes. Judgment is passed on him. His sin? His very existence.

The story is set in late nineteenth century. From the very beginning, there is so much unknown. You don’t know anything about why Oz is being accused. The plot is very intense. There’s some small plot twists throughout the beginning of the series, but it’s towards the end that the plot twists get bigger and bigger. One of them just blew my mind. It changed how I looked at the series forever. The characters are absolutely adorable and so real. They have so many layers to them.

As for content, it somewhat violent and has a little bit of language.

*WARNING* This series, especially the ending, will pull tears from you. Trust me. *WARNING*

This one, I started, then went off to another series, before coming back to this. It has a slow start, but I’m glad that I came back to it. Once you get to where the story really starts, it is amazing.

Thirteen year old Ciel Phantomhive is a noble and the only surviving member of his family. His butler, Sebastian Michaelis, is a demon bound to him by a supernatural contract. This follows the story of Sebastian and Ciel as the owner of the Funtom company and the Queen’s Watchdog.

I love this series so so so so so much. Sebastian and Ciel are amazing, complicated, and twisted characters. This is one of those series where the main characters aren’t necessarily the “good guys”. They do good things, but sometimes they do ruthless things. It is like a series of mysteries, but with this one overall storyline that is terribly intriguing. There are very interesting villains and people that you’re not sure which side they’re on. The plot twists are amazing. It’s set in late nineteenth century in London, England and is just perfect.

As for content, there is this one villain that is a boy but pretends to be a girl which I find uncomfortable. It’s somewhat violent and has some language.

*WARNING* This series may leave you gasping in horror or crying your eyes out. *WARNING*

So…this is one of those series that you’ll either love or hate. I love it, but it is definitely not for everyone.

It is a world full of ghouls. Creatures who look like humans, who blend into human society, but are not humans. These ghouls feed on humans. That is the only way that they can leave. Ken Kaneki and Hideyoshi Nagachika are college students living ordinary lives, unaware that they are surrounded by ghouls, unaware that they’re about to be swept into the world of ghouls.

This story is so thought-provoking. It brings to life questions that really question morals. Sometimes, it is hard to know what is right and what is wrong. The characters are interesting, some of them are more than a bit freaky. I love how much depth there is to some of the central characters. The story is beautiful and tragic and frightening. The plot twist are scary, but the biggest plot twist is the ending. It must be the most heart wrenching ending that I have ever read in my life.

As for content, this contains a lot of gore and violence (including some dramatic torture scenes), some language, and parts where there was almost a sexual scene that either didn’t happen or it didn’t show it.

*WARNING* No matter what I say, you can not prepare yourself enough for that ending. *WARNING* 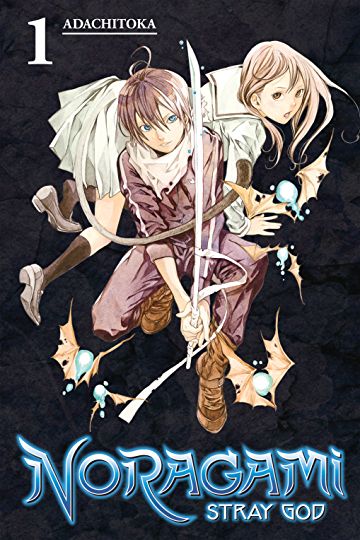 So, I started this and immediately knew that this was going to be a series that I’d love it. Everyone must try this series! It is just so good.

A regular middle school student, Iki Hiyori is hit by a bus trying to save Yato and incidentally becomes a half-phantom. Yato is a stray god who is trying to earn enough money to make a shrine to become a “famous, well-known” god. When Iki finds out that Yato is a god, her life is changed forever.

This is an amazing series! The characters are so adorable and such precious cinnamon rolls. Their banter and arguments are hilarious. The mysteriousness of Yato irked me beyond belief. I had to know more about this god. Wow. The battle scenes were incredible. It got seriously intense super fast. There were moments where I could just hardly breathe.

For content, there is some language and some violence.

*WARNING* Prepare to be gasping for breath. Sometimes, you may forget to breathe. *WARNING* 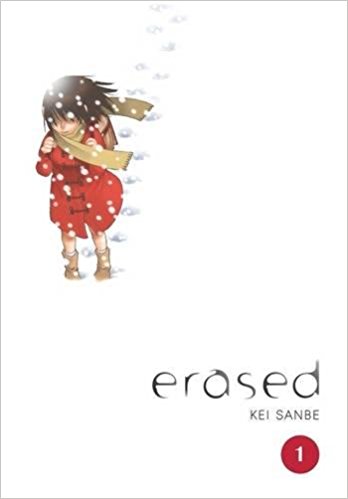 I had heard so many good things about this series, so I finally gave it a chance. And it didn’t disappoint. Like seriously, I was so impressed.

Satoru Fujinuma is a struggling manga artist with a part time job at a pizza restaurant. His life is normal, but for the fact that time seems to “rewind” at random times. To him, this own makes his life worse. That is, until tragedy strikes, which makes him wish for time to rewind right away. But when it does, he goes too far back, eighteen years too far back. His visits a past that he had forgotten about and is given a chance to solve a crime that was never solved.

At the beginning, I was a little unsure about this series. I just really didn’t know where I was going with it. Nothing seemed to happen. It seemed, ordinary. But just when I thought that, everything went crazy. I was shocked. This was an thrilling mystery. The characters were so well developed. Everything they said, was important to the plot. Some of the plot twists just blew me away. I was so invested. This dealt with some serious subjects, such as child abuse. It was amazing and so beautiful.

As for content, there was some violence (especially child abuse) and some language.

*WARNING* This will tear your heart out and rip it to shreds. *WARNING*

This…is a manhwa. This means that it is not black and white, but it is actually colored. The formatting of the drawings is different too. This was my first manhwa and I was impressed. It has a slow start, but it gets overwhelmingly intense.

He awakens. After 820 years of being asleep, Cadis Estrama Di Raizel awakens. He finds himself lost in a world with so many technological advancements. Somehow, he finds his servant, Frankenstein, the principal of a South Korean high school. He decides to enroll in this school in order to learn about how the world has changed. He soon comes to realize that the world is much more dangerous than before.

Okay. This is seriously good. It starts off funny and kind of normal. There is a lot of mystery surrounding the main character and his servant, but there is nothing overtly exciting. Just wait though, this is one of the most intense series I have read. You begin to realize there is so much more to what is going on. The main characters are at first Rai and Frankenstein, but the group expands. Their pasts are so slowly revealed. These characters’ banter and friendships are fantastic. The loyalty they have for each other is so amazing. The plot twists and revelations are shocking and tragic.

As for content, is it violent (because it is colored, it might seem more violent) and it contains language.

*WARNING* Many of the men in this series are unrealistically good-looking. Like seriously, I’m dying. *WARNING*

Do you read manga/manhwa? Or are you interested in reading it? Have you read any of these series? Do you have any recommendations for me to try?

GAH! There are so many other series that I absolutely love, but I think that this will do for now. Please comment below! I’d love to hear your thoughts on this post!

3 thoughts on “Seven of My Favorite Manga (or Manhwa)”