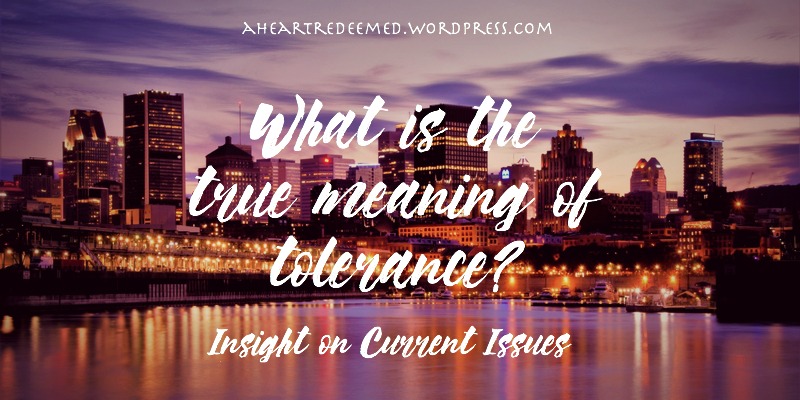 There have been many things in this world that have frustrated me lately. What with the politics, the government, the culture, etc. Sometimes, it seems to all be going downhill. Sometimes, it really scares me. Sometimes, I think, “What is this world coming to?”  END_OF_DOCUMENT_TOKEN_TO_BE_REPLACED 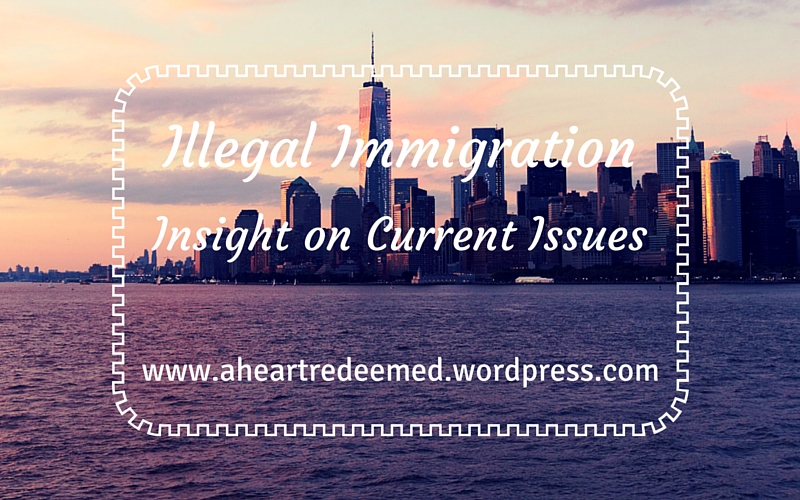 Illegal immigration has been a steadily growing problem for the United States over the past several years. In this essay I would like to give an overview on illegal immigration, how it affects us, how it relates to the Bible, and maybe some pointers on what we should be doing about it.

Illegal immigration is very real and it has got the highest it has ever been in 2007, when it was calculated that there were around 12.2 million unauthorized immigrants in the U.S. It has decreased since then by about a million, but that doesn’t mean that it is alright.

This kind of kind of immigration affects our economy, maybe not as drastically as some people would like to think. But if we just keep allowing illegal immigrants to come and take a little of what we have, that is an open invitation to take all that we have. Many immigrants take jobs (which can affect those who have citizenship and are in need of a job) in the U.S. and give the money to support people back in their home country. This means the money doesn’t cycle back into the economy, which in turn hurts it. Those immigrants are also willing to work for a lower wages because our money goes much farther in their home country. This can hurt the average American who is trying to get a job with good wages.

The Bible teaches us to help the poor, care for the sick, and feed the hungry. We’re to love others as ourselves.

John replied, “If you have two shirts, give one to the poor. If you have food, share it with those who are hungry.”

We’re also told to submit to the authorities placed over us because they were placed there by God. To honor and respect them and to follow them as long as it doesn’t contradict God’s Word. To illegally come into another country, is well, illegal.

We need to be able to prevent illegal immigrants from coming into our country at all. Then we wouldn’t have to worry about dealing with all the mess of deporting them. But because we haven’t been active enforcing the law, there are now over 11 million illegal immigrants in our country! It would be pointless to try to deport them all now. We have so many (most having already been here for years), I think we should give them a way to become legal immigrants. But for those trying to come to over now, we should enforce the law and deport them. I know that there will always be a few who will make it in illegally, but we shouldn’t have allowed it to grow this large. If a person really wants to come and live in our country, they can take the time to come in legally.

In considering the children born in America to illegal immigrants, I believe it is alright to consider them as citizens. It wasn’t their choice where they were born or their fault  for the decisions their parents made. 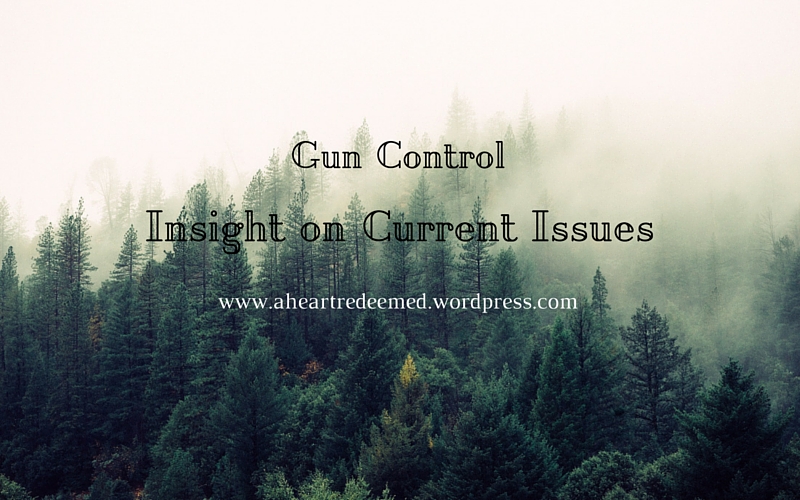 Gun control has been a much discussed topic in the U.S. Many crimes are committed through the use of guns and other similar weapons. As the Second Amendment to the Constitution of the U.S.A. explicitly states that “A well regulated Militia, being necessary to the security of a free state, the right of he people to keep and bear Arms, shall not be infringed.”. But what is our right to bear arms? Are there limitations to this? Should there be tougher gun control laws or easier ones? Are guns the problem that there’s crime? I hope to share my view on all of this and more relating to gun control.

Guns are used by all sorts of people. They’ve been used to do good and to do bad. To save and protect and to kill and destroy. But I don’t think that the guns are the problem. It’s the people who are behind the trigger that decide whether it will be used as a force for good or evil. It’s never the guns that are doing the terrible and horrible things. It is the people. If a person wants to commit a crime and he/she doesn’t have a gun, do you think that will stop her/him? No, of course not! We can always find a way to do evil with whatever we have if we really want to. A gun just makes it so much easier. If we’re going to put really tough gun control laws down, we might as well start putting such laws on everything else, because seriously, just about anything can be used for crime.

I believe that there are limitations to the Second Amendment like age restrictions. You wouldn’t just give a gun to a three year old. Also, those who have committed crimes in the past should never be allowed to have guns unless it’s for military purposes or for defense in a life or death situation. Those same could be said for those with mental issues, we wouldn’t want them to accidentally hurt themselves or those around them. Besides things like that though, I think anyone of a acceptable age should be allowed to have guns if they can afford it. We have a right to have them, whether or not people want us to.

Now we are never going to be able to fully stop crime. We live in such a sinful world that it is quite unrealistic to think that we’ll have a prefect utopia here on earth. We’ll have to wait on Jesus’s return for that. But no matter how fallen this world is, we can still do our best to stop crime. I just don’t think that tougher gun control laws are going to help. In fact, I think that it might make crime worse because as harder laws are put down it makes more people want to break them. To really stop crime, we need to change the people’s lives. The people are the ones who commit crimes, not the tools they use. If we can change people’s heart towards God, we’d be taking a big step towards having peace in this world.

Hey ya’ll! I’m starting a new series of posts on current issues in today’s world. Please feel free to let me know what you think!

Abortion has become a big issue for the United States of America since the late twentieth century. At least, for Christians it is an issue. For most other people, the killing of the fetus in the womb is a part of life. In this essay I hope to convey my stand point on this serious topic. I also hope to give a good reason why I take the view point I do. We must oppose this practice and stand up for what is morally right.

So what is my view on abortion? Well, I hope it would be pretty clear that as a Christian I would believe to be wrong. Abortion is murder. The fetus is alive from conception and is a human being. In the Bible there are references to human beings in the womb called children. God certainly must have believed that they were human, not fetuses. The Bible acknowledges that it’s life is worth just as much as an adult’s.

Now suppose two men are fighting, and in the process they accidentally strike a pregnant woman so she gives birth prematurely. If no further injury results, the man who struck the woman must pay the amount of compensation the woman’s husband demands and the judges approve. But if there is further injury, the punishment must match the injury: a life for a life, an eye for an eye, a tooth for a tooth, a hand for a hand, a foot for a foot, a burn for a burn, a wound for a wound, a bruise for a bruise.

It is murder to kill an innocent human being. One of the Ten Commandments says the we shouldn’t murder. Now we all are born into a world of sin. We’re all sinful and would be condemned to eternal life in Hell if not for Christ. Murder is murder whether it is an adult or an infant.

We as a nation are striving for peace, but there is a war within our very borders. Undeniably it is a war for life itself. Human beings are dying before they even get a chance to see life out of the womb. Life is precious, but we’re constantly destroying it. These children have a right, a right to live.
‭‭
More than half the population in the U.S. believes abortion is wrong. But because of a few dissenters, now abortion is legal. We need to stand up against this legal right to murder. We need to support and finance the organizations that are opposing abortion. Let’s vote for and support legislation that protects the unborn. I’d rather face judgement by man man than judgement by God.

Abortion is wrong. That’s what I believe and I hope that is what you believe too. It is clearly murder of a human being and I’m sure we all know what God says about murder. Abortion is legal now, but I know that if we stand together we can change that. Isn’t that what the African Americans did to get full civil rights? Let’s oppose this. It is our obligation to God to do so.